Our first rotisserie was built in 1986 for my son's '57 Chevy project. Unfortunately (or fortunately), I have no pictures of it. My dad, my son and I build it one Christmas as Tim's Christmas present. A year later, a restorer we bought a parts car from saw the rotisserie and wanted to buy it. We agreed to build him one, but with a revised design to take out all the mistake in the first one. I basically set Tim up building some that summer to make some extra college money.

Our first lift – fixed height, fixed arms, great for '57 Chevy, but not very adjustable. We learned a lot from customer suggestions and request for features. Unlike one of our competitors, we don't claim to have invented the rotisserie. Rotisseries have been around since the '20s. We just began the serious marketing of the product to get it to restorers.

The business was part time for a number of years. I even had the manufacturing subcontracted from '91-95. Due to some hearing difficulties and job problems because of them, I went back to college in 1995 at the age of 51 to get another engineering degree. I took back manufacturing then and did it at our farm. The business continued to grow during the college years until I was 3 classes from graduating. I then decide to totally concentrate on Accessible Systems rather than finish the degree in 1999. My wife, Ethel, has been full time with us since '95. Both of my daughters have worked in the business at one time or another. Tim, a mechanical engineer now, has done CAD and consulting for me.

In 1998 we added the Easy Tilter. After going full time with the business, I had time to work on new designs. A string of new products in addition to the Bottoms Up Lift have been added. The new products are aimed at making the restoration project easier for the single restorer as well as the big folks. 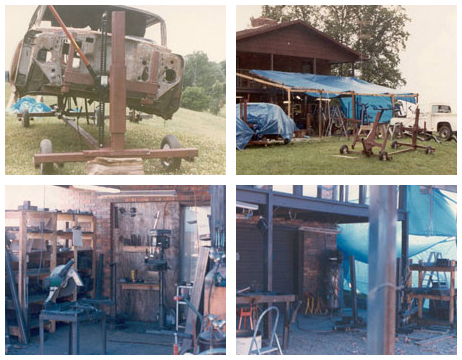 Here is some pictures of our first lift and first shop (a tent at the end of our house).